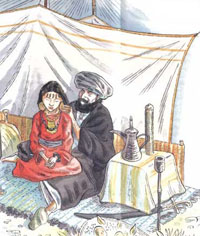 Understanding Muhammad
or say any angels, Khadijah was disappointed. Ibn Ishaq writes: "After this, Gabriel did not come to him for a while and Khadijah said 'I think that your Lord must hate you.'" This demonstrates how eager she was for her narcissist to become a prophet.

Why did Muhammad not take other wives when Khadijah was still alive? Because he was living off her money and in her house. Furthermore, the majority of the people of Mecca derided him. He was called a lunatic. No one would have married him even if he had had money of his own and Khadijah had not been an issue. In Mecca, his followers were a handful of teenagers and slaves with only a few women among them — and none was eligible for him to marry. Had Khadijah survived to see Muhammad's rise to power, most likely she would have had to put up with her husband's vagaries and the humiliation of sharing him with younger and prettier women.

After the death of Khadijah, Muhammad never found another codependent to take care of his emotional needs like she had. Instead, he sought fulfillment by becoming a sexual butterfly. Only a month after his wife's death, Muhammad covinced his loyal friend and follower, Abu Bakr, to brought him his six-year-old (young) daughter, Aisha. Abu Bakr was shocked. He tried to dissuade him, saying, "But we are brothers." Muhammad reassured him they were only brothers in faith and that his marriage to that little child was not haram.[122]

He further told him that she had been shown to him twice in dreams in which he saw an angel carrying the little Aisha in a silken piece of cloth. "I said (to myself), 'If this is from Allâh, then it must happen.'"[123] Now Abu Bakr was left with the options: Leaving Muhammad, for whom he had made so many sacrifices, denouning him, calling him a liar and going back to his people, acknowledging he had been a fool; or doing whatever Muhammad asked of him. This is often the difficult choice cultists must make. Abu Bakr even built a mosque in the backyard of his house for Muslims to pray. He would often cry when reciting Muhammad's allegedly revealed verses. Denouncing him at this stage, was not easy. Cultists are trapped. They have often sacrificed so much for the cult that going back is more painful than submitting. Abu Bakr pleaded

Muhammad created a harem with more than a score of women. He tried to compensate the loss of his sugar mommy with an abundance of younger women. He kept adding to the collection of his wives and concubines but none could meet his childish needs the way Khadijah had. He needed a mother to take care of his inner child, something his teenage wives could hardly do for a man who could be their grandfather ...