In other words, he would be the person who would advise God as to who should be sent to Hell and who should be admitted to Heaven. These are just some of Muhammad's megalomaniac claims about his own lofty station that are reported in the Qur’an. …"

"... the model to be imitate ..." Q 33:21 0:55 Robert Spencer: "… if the prophet did it (beheadings), so the mujahidin in Iraq who are beheading people are simply obeying the examples of the prophet. … he (Muhammad) orderd the assassination of his several opponents, and he behaved in general lika a typical 7th century warlord. The Problem is, when this is transfered to the 21th century behavior, the 21th context of behavior, then what you get ... are terrorists!" 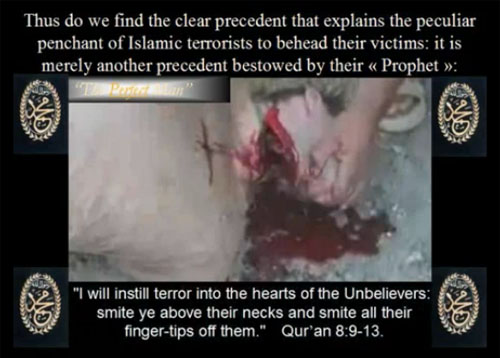 "... Thus some 600 to 900 men from the Qurayzah were lead on Muhammad's order to the Market of Medina. Trenches were dug and the men were beheaded, and their decapitated corpses buried in the trenches while Muhammad watched in attendance. Male youths who had not reached puberty were spared. Women and children were sold into slavery, a number of them being distributed as gifts among Muhammad's companions. ...

… The notion that this slaughter was sanctioned by God as revealed to Muhammad was, according to Kister, reflective of "'the current (as of 1986) Sunni view about the slaughter of the Banu Qurayzah." 5. Gairdner, also relying exclusively upon Muslim sources characterizing the slaughter of the Qurayza, highlights the pivotal role that Muhammad himself played in orchestrating the overall events:

The umpire who gave the fatal decision (Sa'ad) was extravagantly praised by Muhammad. Yet his action was wholly and admittedly due to his lust for personal vengeance on a tribe which had occasioned him a painful wound. ...


… for Sa'ad first declined and tried to make Muhammad take the responsibility, but was told "qad amarak Allahu takhuma fihim" "Allah has commanded you to give sentence in their case". From every point of view therefore the evidence is simply crushing that Muhammad was the ultimate author of this massacre. 6 ...