'There is nothing to give them but the Sword'

8/8/2014 "A Christian girl beheaded by ISIS terrorists. There is no doubt that we face genocide."

coward mafia godfather, 8:17 'And you did not kill them, but it was Allah who killed them. … that He might test the believers' 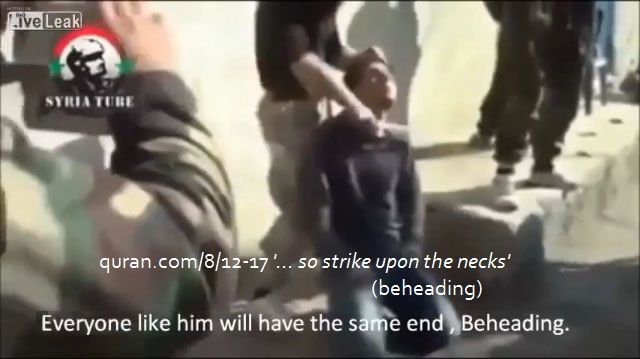 HORROR#1 Muhammad's "best example" Q33:21 in Bukhari "Punishment of Disbelievers (automatically) at War with Allah and His Apostle" No. 794 "Some people from the tribe of 'Ukl came to the Prophet and embraced Islam [embrace only as so-called "Hypocrites" Q.33:23,24 fear of being killed, Q9:5, 'Ayah of the Sword']. The climate of Medina did not suit them, so the Prophet ordered them to go to the (herd of milch) camels of charity and to drink, their milk and urine (as a medicine). They did so, and after they had recovered from their ailment (became healthy) they turned renegades (reverted from Islam [Allah, Q4:89 "kill them wherever ye find them"]) and killed the shepherd of the camels and took the camels away. The Prophet sent (some people) in their pursuit and so they were (caught and) brought, and the Prophets ordered that their hands and legs should be cut off and their eyes should be branded with heated pieces of iron, and that their cut hands and legs should not be cauterized, till they die."