Cover women heads according to Quran

33:59 ... to draw their cloaks (veils) all over their bodies (i.e. screen themselves completely except eyes or one eye to see the way)

islamicity.com ...3. To conceal their adornment and natural beauty, which scholars have interpreted to mean the whole body except for the face, hands, and (for Hanafis) the feet.... 40 KB

Islamic Voice ... In short, the Qur’anic injunctions regarding veiling of the women are crystal clear. According to the teachings of the Qur’an and the Sunnah, only chaste women, observant of the obligation to veil, are true Believers. They are the protectors of their chastity and honour and strictly follow other Islamic injunctions. The women who lack these qualities, are not true Believers....

...For example, the argument that Niqaab is counterproductive to Da’wah in non-Muslim lands. After having established that the Niqaab is indeed an authentic part of Islam, we must then conclude that to hide it is what is counterproductive to Da’wah. (invitation to Islam is the highest duty of a Muslim, and play Taqiyyah: the Holy Deception [3:28, 16:106, 5:51]) 45 KB

angelfire.com ..."covered themselves", in the above hadeeth means that they "covered their faces." [Fath al Bari] 16 KB

Whoever says that cover Muslim women heads is not obligatory is a liar or is just a modern "Caféteria" Mulsim who denies the evil teachings of the pedophile mass murderer Muhammad (later Medina verses [short for Medinatul Nabi, the Prophet's Town]), and lives only to the peacful suras (Mecca) of the early Islam, when Muhmmmad was weak and had to woo new converts with his surgary preaching.

Quran 2:222 Stay away from menstruating women

4:34 "Beat them (women)"
The sura 4:34 is knowingly translated false into English, to SANITIZE the Quran for the West. In the original Arabic Quran [Google translate: Arabic into English] and (e. g.) in the German translation, there are no such words as "(first)(next)(at last)" and "(lightly)" The chronical order is selected by the husband, and it is allowed for him to beat her hard! 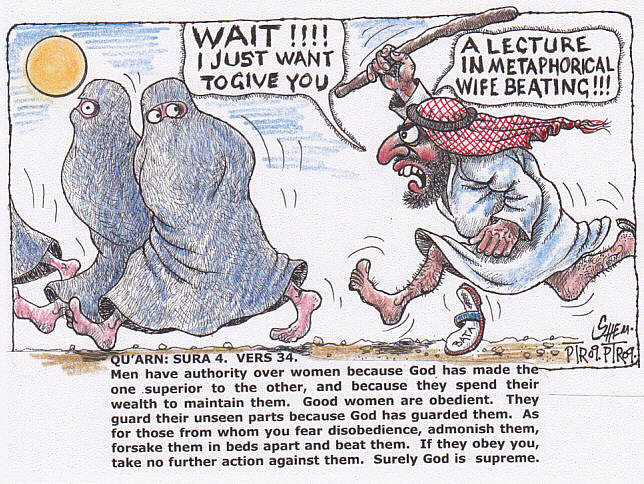 Australian convert: wife-beating is “misinterpretation of a verse from the Koran”

The Qur’an (4:34) tells men to beat their disobedient wives after first warning them and then sending them to sleep in separate beds. This is, of course, an extremely controversial verse, and many Islamic spokesmen and others in the West deny that it has anything to do with wife-beating, so it is worth noting how several translators render the key word here, وَاضْرِبُوهُنَّ, waidriboohunna.
Pickthall: “and scourge them”
Yusuf Ali: “(And last) beat them (lightly)”
Al-Hilali/Khan: “(and last) beat them (lightly, if it is useful)”
Shakir: “and beat them”
Sher Ali: “and chastise them”
Khalifa: “then you may (as a last alternative) beat them”
Arberry: “and beat them”
Rodwell: “and scourge them”
Sale: “and chastise them”
Asad: “then beat them” ....

The Quran on beating wives