4:157 Denial of crucifixon of Jesus Christ

So while taking a life may be tantamount to killing all humanity, if one is spreading "corruption in the land" [e.g. only reject the Quran] then one should be "killed or crucified or that their hands and feet be cut off from opposite sides or that they be exiled from the land." And that is exactly the charge that Islamic jihadists often make to justify their violence against unbelievers: that their victims were spreading "corruption." 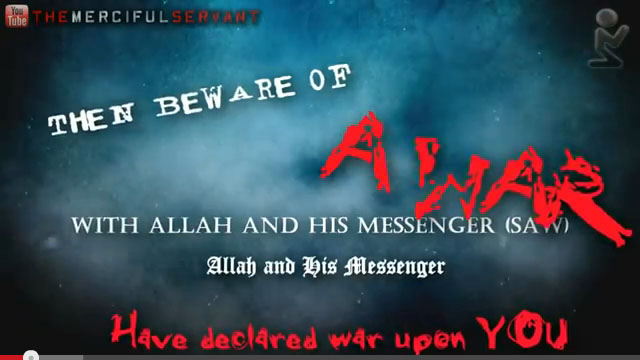 Video from: Crucifixion of a Spy..Le Crucifiement d'un Espion On August 27, 2012, a member of the leading jihadi forum Shumoukh Al-Islam posted a YouTube link to a video showing a man accused of spying for the U.S. by placing chips to direct drones targeting terrorists being crucified on an electric pylon in Abyan province in south of Yemen. A sign placed above the man's head shows the group's flag and verse 5:33 of the Koran, which reads: "The recompense of those who wage war against Allah and His Messenger and do mischief in the land is only that they shall be killed or crucified or their hands and their feet be cut off from opposite sides, or be exiled from the land. That is their disgrace in this world, and a great torment is theirs in the Hereafter."