Muhammad and his Cult (Extract, vers.#2)

e are often taken aback by the level of fanaticism of Muslims. Millions of them riot, burn churches, and kill innocent people because a newspaper has published a few cartoons of Muhammad or because the Pope has quoted a medieval emperor who said violence is not compatible with the nature of God.

People generally are biased in favor of a belief system that has so many followers. They believe that the sheer size of Islam qualifies it as a religion. But is Islam really a religion?

Some say that all religions have started as cults until, with the passage of time, they gradually gained acceptance and the status of religions. However, there are certain characteristics that distinguish cults from religions. Dr. Janja Lalich and Dr. Michael D. Langone have created a list of such traits, later published an a book co-authored by Lalich,279 that describes cults fairly well.280


Back to Top
Understanding Muhammad
The more a group or a doctrine has these characteristics the more it must follow that it should be defined and labeled as cult. The following characteristics make up that list, and I have compared Islam to them, point by point.

1.
The group displays exessively zealous and unquestioning commitment to its leader and (whether he is alive or dead) regards his belief system, ideology, and practices as the Truth, as law.
Muslims are extremeley zealous about their faith and have an unquestioning commitment to their prophet, whose book, the Qur'an, is Truth and Law [5:48 '… For EACH We have appointed a DIVINE law'] for them.

2.
Questioning, doubts, and dissent are discouraged or even punished.
Muslims are prohibited to question[5:101, hadith 555] or doubt the basic tenets of their faith, and dissent is punishable by death. Q.4:89 Death for Apostasy

3.
Mind-altering practices (such as meditation, chanting, speaking in tongues, denunciation sessions, and debilitating work routines) are used in excess and (...)
Five times during the day Muslims stop whatever they are doing and stand for a repetitive and ritualistic prayer [ahadith 45, 345] and (...)

6.
The group has a polarized us-versus-them mentality, which may cause conflict with the wider society.
Muslims have a very strong us-versus-them mentality. They call all non-Musims, regardless of faith, kafir, an expressly derogatory term, which means one who blasphemes God. (Qur'an 5:73) For them, the world is forever divided into Dar al Salam (House of Peace) and Dar al Harb (House of War). The non-Muslim countries are the House of War. It is the duty of every Muslim [Muhammad's testament] to wage jihad in the House of War, and to fight [2:216, 4:76], kill [9:5 '… means, on the earth in general'] and subdue non-Musims [9:29] and convert that land into the House of Peace [8:39, 9:33]. Peace, according to Islam, can only be attained by subduing [9:29] non-Muslims and making them subordinate to Islamic rule [allah'SS key ayah 5:48 '… For each We(in Royal plural) have appointed a DIVINE (sharia)law']. The idea is not so much to convert everyone to Islam, but to make Islam dominant. [8:39, 9:33] The non-Musims can continue practicing their religion, but only as dhimmis, a term which means "protected" and is only applied to Christians and Jews[for 'corrupting' the Bible]. The Christians and the Jews (the people of the Book) will be protected, provided

Back to Top
Understanding Muhammad
they can pay the protection tax, known as the jizyah, and feel themselves humiliated and subdued, as stated in the Qur'an.[281] If they fail to pay the jizyah, they can be exiled or put to death. This is how the Mafia operates. If you own a business, you could be harassed or even killed, (...)

7.
The leader is not accountable to any authorities.
(...) He could raid civilians, kill unarmed men, loot their properties and take their women and children as slaves and even rape them. He could assassinate his critics [hadith 369] and torture them [5:33, hadith 794] to make them reveal where they hid their treasures. He could have sex with children. [ugliest ayahs 65:4, 33:49] He could lie and deceive his opponents [3:28, 16:106]. He could massacre his prisoners [33:26] of [offensive jihad 'talab', 2:216, 4:76, 8:39, 9:5, 9:29-33, 48:1-28] war cold-bloodedly. None of that bothers his follwers. At first they deny all of the above charges vehemently, accusing you of maligning their prophet, but once the evidence is presented, they suddenly change tactics and defend him, justifying the very evil deeds that they had outrageously denied ...

8.
The group teaches or implies that its supposedly exalted ends justify whatever means it deems necessary. This may result in members' participating in behaviors or activities they would have considered reprehensible or unethical before joining the group (for example, lying to family or friends, or collecting money for bogus charities).
______________________

281 Qur'an 9:29 Fight those who believe not in Allâh nor the Last Day, nor hold that forbidden which hath been forbidden by Allâh and His Messenger, nor acknowledge the religon of Truth, (even if they are) of the People of the Book, until they pay the Jizya with willing submission, and feel themselves subdued.
Screenshot Quran, At-Touba 9 Verse 29

Back to Top
Muhammad and his Cult
In Islam, the ends always justify the means. For example, killing is wrong, but it it is done to promote Islam, it is good. Suicide is prohibited [4:29], but suicide bombing [rational in jihad root cause 8:39, 9:111, hadith 72-73] that will cause the death of non-Muslims is a holy act. Stealing (...)

Sexual intercourse out of marriage is taboo [24:2 ' … lash each one of them with a hundred lashes'], but rape of unbelieving women [ sex slaves 4:3, 24 '… those your right hand possesses' in general, 33:50 in war] is okay. The goal, which is the establishment of the regin of Allâh on Earth, is regarded to be so lofty that everything else becomes secoundary. In the history of Islam, we read that people murdered their own fathers or waged war against them. Such actions are praised as the sign of faith and devotion of the believer. Lying in Islam is prohibited, except when it is done to deceive non-Mulslims and advance the interests of Islam. (Taqiyyah + Kitman + Outwit + Qur'an 3:28 + 16:106 + 5:51 + 9:29, …)

Back to Top
Understanding Muhammad
(...)

14.
Members are encouraged or required to live and/or socialize only with other group members.
Muslims are taught to shun kafirs and are encouraged to socialize only with fellow Muslims. The Qur'an prohibits taking friends from among unbelievers (Q.3:28), calls them najis (filthy, impure) (Q.9:28) and orders harshness against them (Q.9:123). According to Muhammad, unbelievers are the "vilest animals" in the sight of God. (Q.8:55 [8:37, 98:6 'worst of creatures']) 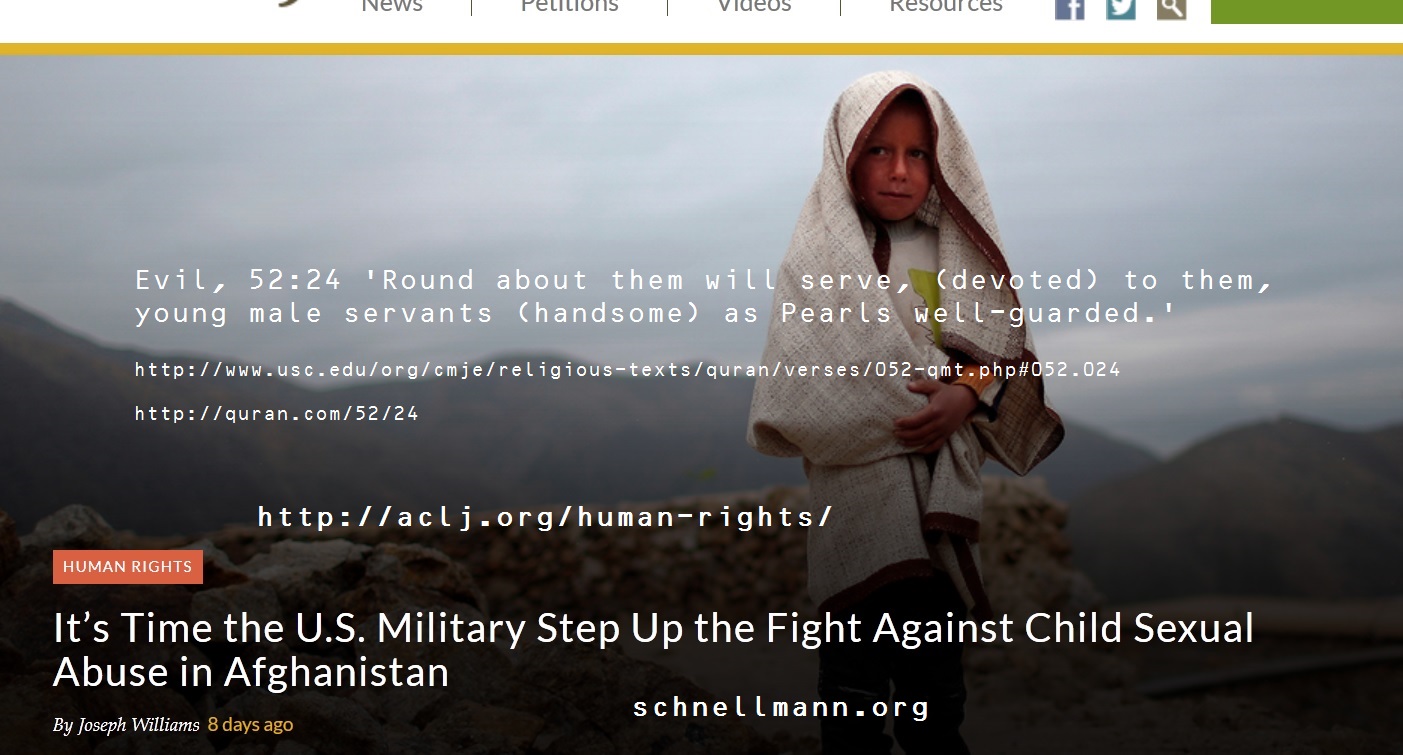