4:89 "...But if they turn renegades ("reject faith"), seize them and SLAY them wherever ye find them"
4.88-9 (Hilali-Khan).... Comment: Ali Sina This verse is a command to slay apostates. “emigrate in the way of Allah” (Arabic: “yuhajiroo fee sabili Allahi”, transliterated: “make Hijra in the way of Allah”) means; interpreting “hijra” in its spiritual sense, to “become Muslim” and thus people who “turn back” are turning back or away from Islam - i.e. becoming apostate....


Thus those who have fled from what is forbidden, i.e., embraced Islam, should be killed if they "turn renegades."


Quran a Book out of Context

The apologists do not realize that what they say is apostasy! Claiming that the Quran cannot be understood is not clear and needs is disbelieving in the Quran itself. "... and the best of planners (i.e. deceiver) is Allah." 3:54, 8:30

Bestseller Author ("God's War on Terror") & ex-Muslim terrorist Walid Shoebat who knows exactly the evil of Islam (2 min 15 sec): "... in the Qur'an Chapter 4 Verse 89 ... if they leave the faith or become renegade, seize them and slay them wherever you find them"

"... 3. The third Hadith shows that Muslims will go to war to fight a group of apostates. There is also some economic benefits to Muslims out of such a war.

4. The fourth Hadith shows that those who leave their religion (Islam) are to be killed. Not only that, but the killers will also be rewarded on resurrection day.

5. The fifth Hadith is a validation that early Muslims had no problem chopping off heads of apostates.

6. The sixth Hadith below shows Muhammad telling his followers that there are three groups of people who should be killed: murderers, adulterers, and apostates ..."


Understanding Muhammad
If you renounced the faith, you would surely do evil in the land, and violate the ties of blood. Such are those on whom God has laid His curse, leaving them deaf and sightless ... Those who return to unbelief after God's guidance has been revealed to them are seduced by Satan and inspired by him ... (Q.47:23-28)
Here Muhammad is promising divine chastisement for the apostates. He also prescribed punishment in this world. Bukhari has reported the following hadith:
Allâh's Apostle said, "The blood of a Muslim who confesses that none has the right to be worshipped but Allâh and that I am His Apostle, cannot be shed except in three cases: In Qisas for murder, a married person who commits illegal sexual intercourse and the one who reverts from Islam (apostate) and leaves the Muslims."307
Another hadith tells us that some apostates were brought to Ali and he burned When the news of this event reached Ibn 'Abbas, he said, "If I had been in his place, I would not have burnt then, as Allâh's Apostle forbade it, saying, 'Do not punish anybody with Allâh's punishment (fire).' I would have killed them according to the statement of Allâh's Apostle, 'Whoever changed his Islmaic religion, then kill him.'"308


The Power of Persuasion

What attracted people to join Jones' church in the first place? Let us analyze this question and compare it to what attracts new converts to Islam.

Osherow credits Jones's charismatic personality to his oratory power, aided by his genius and manipulating people who were most vulnerable. With promises and carefully honing his presentation to appeal to each specific audience he would easily win their hearts and imagination. In the words of Cicero "Nothing is so unbelievable that oratory cannot make it acceptable."

Muhammad was fully aware of the power of oratory. He believed that "in eloquence there is magic"309 and used to say: "Some eloquent speech has the influence of magic (e.g., some people refuse to do something and then a good

(new sample page 243)
When Sane People Follow Insane People
a tape-recording of the final minutes [quoted earlier], he stepped into the bathroom and shot himself in the head. He left behind a note, saying that if his death inspired another book about Jonestown, it was worthwhile. (Newsweek, 1979) Doesn't this shed a light on the psychopathology of a suicide bomber?

Jeanne and Al Mills were among the most vocal critics of the People's Temple following their defection, and they topped an alleged "death list" of its enenmies. Even after Jonestown, the Mills had repeatedly expressed fear for their lives. Well over a year after People's Temple massacre, they and their daughter were murdered in their Berkeley home. Their teen-age son, himself an ex-People's Temple member, testified that he was in another part of the large house at the time. As yet, no suspect has been charged. Therer are indications that the Mills knew their killer. There were no signs of forced entry, and they were shot at close range. Jeanne Mills had been quoted as saying, "It's going to happen; if not today, then tomorrow." On the final tape of Jonestown, Jim Jones blamed Jeanne Mills by name, and promised that his followers in San Francisco "will not take our death in vain." (Newsweek, 1980)

Muslims consider it their duty to kill anyone who leaves Islam. Their hatred of apostates is unbelievably intense. There is nothing that a Muslim hates so feverishly as an apostate. Muslims will not relent or give up until they find and kill apostates. Those who dare to defy Islam do so at their own peril. Muhammad's orders are unequivocal:

But if they turn renegades, seize them and slay them wherever ye find them. (Q.4:89) 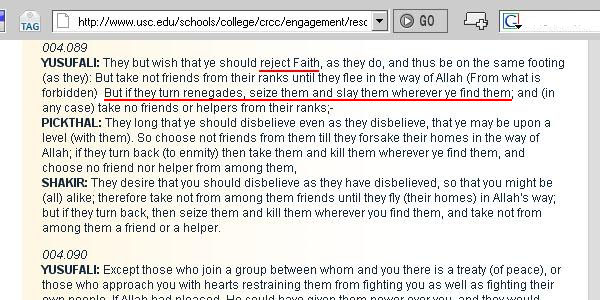 "... Thus those who have fled from what is forbidden, i.e., embraced Islam, should be killed if they "turn renegades."


Continued Hadith States Renegade Means Apostate!
Ahadith clearly shows the meaning of that passage for a renegade is one who leaves Islam i.e. apostate: 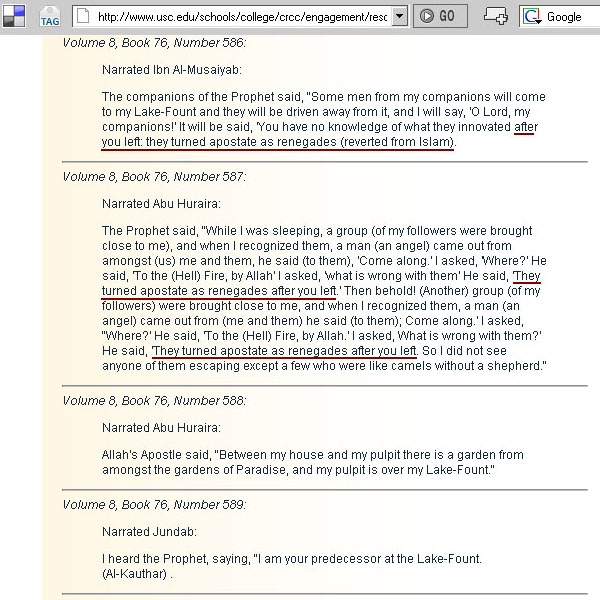 "Death for Apostasy"
By: Andrew G. Bostom
FrontPageMagazine.com | Monday, March 27, 2006
The apostasy of a Muslim individual whose parents have also been Muslim is a very infectious, dangerous and incurable disease that appears in the body of an ummah (people) and threatens peoples lives, and that is why this rotten limb should be severed.

And punishment by death for apostasy from Islam is firmly rooted in the most holy Muslim texts—both the Koran, and the hadith—as well as the sacred Islamic Law (the Shari’a). Koran 4:89 states*:

One of the most authoritative Koranic commentators, Baydawi (d. 1315/16) interprets this passage thus: “Whosoever turns back from belief (irtada), openly or secretly, take him and kill him wheresoever ye find him, like any other infidel. Separate yourself from him altogether. Do not accept intercession in his regard" (cited in Zwemer, The Law of Apostasy in Islam, 1924, pp. 33-34). Ibn Kathir's (d. 1373) venerated commentary on Koran 4:89 concurs, maintaining that as the unbelievers have manifested their unbelief, they should be punished by death ..."

Apostasy according to Shariah Law: An Illustration 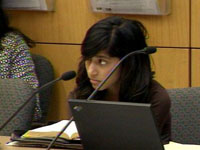 (Dr. Wafa Sultan, ex-Muslim) "... Under Sharia, if a Muslim leaves Islam or converts to another religion he / she is an “apostate,” to be killed. Under Sharia every Muslim has the right to kill such an apostate without any questions asked.


After hearing the story of Rifqa Bary I urge well meaning American citizens to take action and keep this innocent girl out of her family’s reach. There are all kinds of reasons to believe that she will be harmed both emotionally and physically, or worse-be killed-once her family has charge of her. Our Western court system must be educated on Islamic apostasy laws to understand Rifqa Bary’s predicament, and the plight of all those like her who choose to leave Islam ..."