65:4 is the most ugliest & filthiest Sura of the Shit Quran

"CHAPTER 13 & 14: Allah Is a Pedophile Monster Baby Tilths" (Page 123) "... No God would ever allow the marriage and divorcing of little girls. Verse 65.4 is so evil, so immoral, so outrageous, so corrupt - God authorizing the rape and molestation of young girls ... The Pedophile Monster is Muhammad" (513 KB)
"ISLAM: EVIL IN THE NAME OF GOD" godofreason.com

Aisha: The Child Bride of Muhammad
"... Abu Bakr was shocked!"

"... 2) EVIDENCE THAT ISLAM ALLOWS CHILDREN TO ENGAGE IN SEX BEFORE MENSTRUATION"

fatwa No. 12708 (108 KB)
fatwa No. 12708
“... Marriage to a young girl before she reaches puberty is permissible according to sharee’ah, and it was narrated that there was scholarly consensus on this point.

1 – Allaah says (interpretation of the meaning):

In this verse we see that Allaah states that for those who do not menstruate – because they are young and have not yet reached the age of puberty – the ‘iddah in the case of divorce is three months. This clearly indicates that it is permissible for a young girl who has not started her periods to marry. 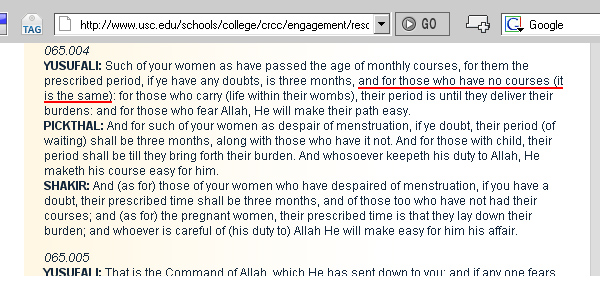 In other words: Pedophilia is allowed in Islam!
"... The same for the young, who have not reached the years of menstruation. Their `Iddah is three months like those in menopause."

(Print) "A Complete Guide to Pedophile in Islam" (168 KB) "... The underlined text: “Those who have not menstruated yet” denotes those who have menstruated because of being young. The Tafsirs have been reproduced from this website: http://www.altafsir.com


"... 7: Conclusions: Muhammad was a pedophile"
"Aisha the Child Wife of Muhammad"

The "Noble" Quran Proves It!

'iddah for Pre-Puberty Kids
when you have touched them (in a sexual way)
Qur'an 65:4, At-Talaq (Divorce)

Tafsir 65 At-Taalaq
"The `Iddah (Waiting Period) of Those in Menopause and Those Who Do do not have Menses"
"... The same for the young, who have not reached the years of Menstruation. Their `Iddah is three months like those in menopause."

Take this Sahi Hadith explaining the verse by Mo Himself:
(Sahih: authentic, true)

"... and those who never had menses, their prescribed period is three months before Puberty, which indicates that giving her into marriage before Puberty is permissible" 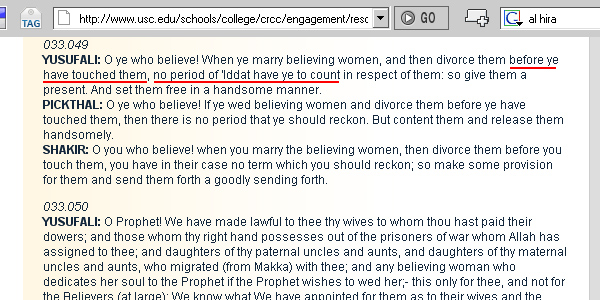