U.K.: Over 22,000 girls at risk of being taken abroad for female genital mutilation

FEMALE CIRCUMCISION: THE UNKINDEST CUT OF ALL

Horror in the U.S.: 228,000 women have undergone or are at risk for female genital mutilation

Female genital mutilation “is part of the Sunna of the Prophet”

"Are You a Sponsor of Female Genital Mutilation?"


"FGM - The practise in Sudan is mutilation and Islam is 100% oposed to it! It's harmfull to the women, many die in these process ... many infections. Does Islam support or allow Female Circumcision? YES!

But in at a very limited scale … very limited in the practise … only the end of the clitoris … so it has no impact of the feeling of the women than as a circumcision of a male. This is the basic practise that is permissible in Islam

The circumscisin in Egypt, Sudan and the West-African contries is an extreme view to ensure that the verginity of a woman involved … and it is form the pre-Islamic times. The harm that comes from all of this practise - FGM - Islam prohibits it"
click to zoom¬

About 6,000 girls fall victim to genital mutilation every day, or about 2 million a year. The World Health Organization (WHO) estimates that between 100 and 140 million women worldwide are circumcised. Most circumcised women live in 28 African countries, as well as in Asia and the Middle East. Female Circumcision has been adopted and promoted by various groups within Islam.

It is forbidden in Christianity Leviticus 19:26-28.

The practice of circumcision in Islam comes from the hadith, sharia law and the consensus in Islamic communities.

The Sharia The following reference to Shariah law comes from Ahmad ibn Naqib al-Misri, Reliance of the Traveller - A classical manual of Islamic sacred law. This book comes with the approval al-Azhar University. e4.3 [Translated from Arabic] Circumcision is obligatory (for every male and female) by cutting off the piece of skin on the glans of the penis of the male, but circumcision of the female is by cutting out the clitoris (this is called KHUFAAD). 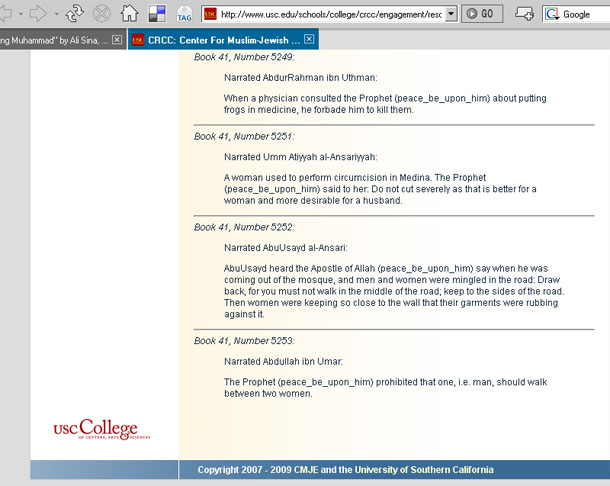 Muhammad allowed to cut off the end of the clit! 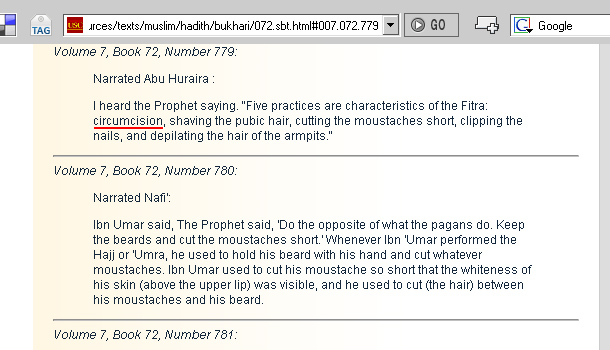