Qur'an 4:56 burning for all eternity in Hell
Home

Mahdi Army will come from region of KHORASAN (primarily Afghanistan)

Mohammed's Flag and Seal "… Mohammed is the messenger of Allah”, seems to be missing but is NOT – it is incorporated in the rounded shape underneath. That white circle on the flag is of special significance since it represents Mohammed's SEAL."

[ … And Al-Fitnah [time of disbelieve in Allah, i.e. chaos] IS WORSE than killing. "Shirk (POLYtheism) is worse than killing.'' (see also Q2:191) — the GREATEST sin of Allah, to worship OTHERS, i.e. associate partners with Allah, i.e. Trinity of Christianity ]

The Shahada i.e Muslim declaration of belief:
"There is no god but God, Muhammad is the messenger of God." (writing on flag) 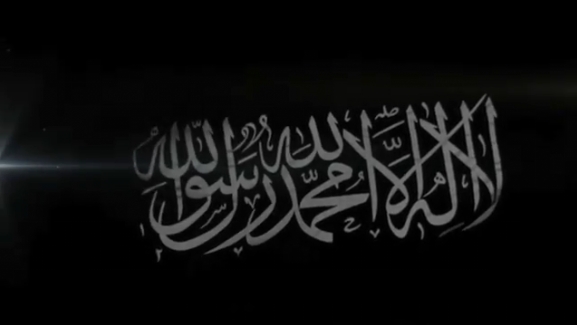 The WHITE flag (only) for Dar al-Islam (Arabic: دار الإسلام‎ literally house/abode of Islam; or Dar as-Salam, house/abode of Peace; or Dar al-Tawhid, house/abode of monotheism) is identified as the "flag of the Caliphate" (and for the Millitary leader)
while the black one (Dar al-Harb, house of war, non-Muslim countries) is dubbed the "flag of Jihad" ... and is carried into battle
(Khorasan is Iran for answering-islam.org) 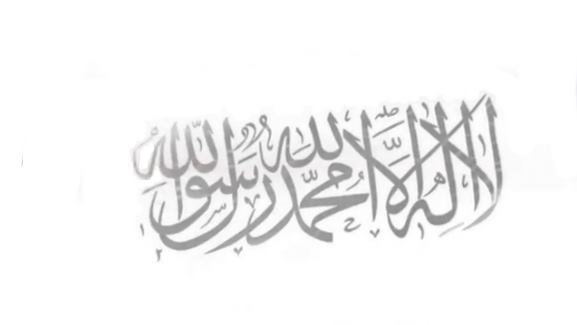 "If you see the black flags coming from Khurasan (Afghanistan),

join that army, even if you have to crawl over ice, for that is the army of the Imam al-Mahdi

and no one can stop that army until it reaches Jerusalem.”

… Dear Prophet Muhammad Salallaho alayhay wa alay he wa sallam) said: Black Flags will appear from KHORASAN ,Nothing will will stop them until they will be placed at Elya(The Holy Land of Jerusalem)" [Masnad Ahmad Volume 4,Hadith 1599] 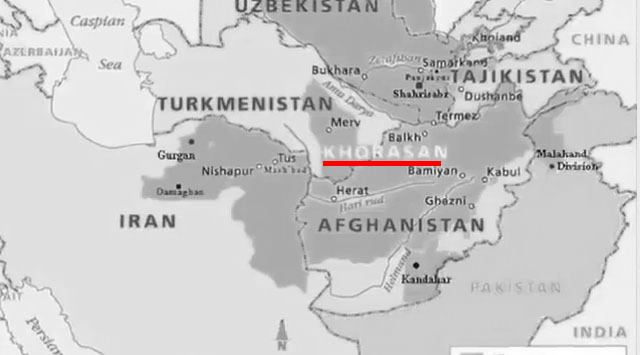 SaHeeH Bukhari Book 53, No. 401 '...He said, "Count six signs that indicate the approach of the [last] Hour: my death, the conquest of Jerusalem,....' Adbullah bin Haris (R.A) reported that Dear Propet(salallaho alayhay wa sallam) said, Some people will come out from the EAST who will make Caliphate(Islamic rule) easy for Imam Mahdi


"The Last Day will not come until the Muslims fight the Jews and KILL THEM" SaHeeH (i.e. "sound", "reliable") Muslim Book 41, Number 6981-5
… from Heinrich Himmler