“The power of Salafis

(German video of ARD/SWR) Thanks to PI

"And fight them until there is no more fitnah
and the religion is all for Allah"
Al Anfaal 8:39
"So give respite to the disbelievers.
Deal you gently with them for a while."
at Taariq 86:13-17

BUT 3:151 "Soon shall We cast terror into the hearts of the Unbelievers"

37 KB (transl. German) "The Salafi Da'wah is that of the Qur'an and the Sunnah. It is the Religion of Islam - pure and free from any additions, deletions or alterations...."

A Salafi (Arabic: سلفي‎) is a Muslim who emphasises the Salaf ("predecessors" or "ancestors"), the earliest Muslims, as model examples of Islamic practice (the "BEST EXAMPLE" 33:21 Prophet Muhammad).

SaHeeH (i.e. "sound", "reliable", most authentic) Bukhari Book No. 819 … "The Prophet said, ‘The BEST PEOPLE are those living in my generation, then those coming after them, … coming after (the 2nd generation) … There will be some people after you, WHO WILL BE DISHONEST AND WILL NOT BE TRUSTWORTHY (i.e.

Sahih Muslim Book 57 "The Companions of Muhammad" No. 1 - 3 … "Allah's Apostle said, 'The BEST of my followers are those living in MY generation (i.e. my contemporaries) … then the Prophet added, 'There will come after you, people who will bear witness without being asked to do so, and will be treacherous and untrustworthy [wishy-washy, or "MODERATE" Muslims], and they will vow and never fulfill their vows, and fatness will appear among them.'

Allah about the today so-called "MODERATE" Muslims in his Qur'an 33:23, 24 "… and punish the Hypocrites" 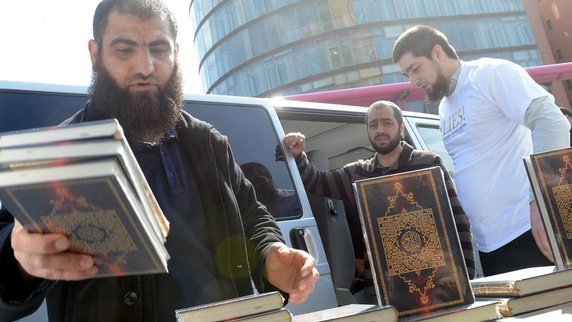 "They distribute the Koran in large quantities in the pedestrian zone. The radicals(? i.e. devout) among them go to demonstrations against cartoons of Mohammed with violence against the police.

These days, the public gets to know about the extremely fundamentalist Muslims(?) who are preparing the security agencies concerned on: so-called Salafists.

They stand for an original (ancient) Islam, many of them want to implement here in Germany. For them, the Koran stands over the German laws. The Prophet Muhammad to be defended."

9:111 "slay and are slain" for promised paradise (i.e. direct going as a maryr into the hightes 7th level of Muhammad's bordello) which fulfills verse 9:5 + 9:29

"Her bizarre world of heaven and hell, believers and unbelievers to preach in mosques and spread it on the Internet. They seduce that young people who are looking for guidance."

55:56 "In them will be (Maidens), chaste, restraining their glances, whom no man or Jinn before them has touched"

4:56 "Those who reject our Signs (Quran), We shall soon cast into the Fire: as often as their skins are roasted through, We shall change them for fresh skins, that they may taste the penalty: for Allah is Exalted in Power, Wise."

"But how do they manage that? And what are the consequences? The film tells the story of young people who have slipped into the Salafist scene. Of young men who were radicalized that drew even in the holy war, where they gave their lives."

"Of parents and families who fear for their sons, daughters and sisters. Have experienced first hand by insiders, the indoctrination by Salafists.

Of hate mongers, the pull from mosque to mosque. And people who want to educate and warn of wave of radicalization of young Muslims.

The authors Eric Fritz and Beres Schmaldienst have researched for months and paint a grim picture: The Salafist scene is very popular. Their lead characters take claim to preach the "true Islam" and offer simple answers to difficult questions of life."

The Salafis preach in reality the true Islam!

Video from: An Open Debate Challenge to Pierre Vogel
Home