(video) Boy Digs Own Grave in Expectation of Martyrdom to the 'best example' 33:21 Muhammad in Bukhari Book of Jihad, hadith 72(-73) 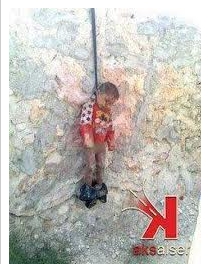 Dec 10, 2012 BILD "… The dead should be, according to information from opposition circles about kidnapped officers."

Revelation 20:4 "4And I saw thrones, and they sat upon them, and judgment was given unto them: and I saw the souls of them that were beheaded for the witness of Jesus, and for the word of God, and which had not worshipped the beast, neither his image, neither had received his mark upon their foreheads, or in their hands; and they lived and reigned with Christ a thousand years."

Word of the coward sadist Allah:

The words "(in fight)" in sura 47:4 are invented by the translator Yusuf Ali, and does not exist in the original Arabic text. But nevertheless, non-Muslim countries are Dar al-Harb [al-Kufr, unbelieve], the domains of WAR ... through bloody jihad 4/74-76, 89, 95

Picture from: Islamic Depictions of Mohammed with Face Hidden

This is a miniature from Siyer-i Nebi, a Turkish religious biography of Mohammed completed in 1388 and later lavishly illustrated with 814 miniatures under the reign of Ottoman ruler Murad III, being completed in 1595. Many of the miniatures depict Mohammed, and this particular one shows Ali bin Abu Taleb beheading Nasr bin al-Hareth in the presence of Mohammed and his companions.
Home