(video) 12th Imam: Who is Mahdi? — Let's listen to Ahmadinejad 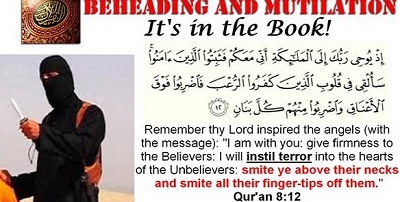 Final Will And Testament


NO Muslims in heaven yet (till “Day of Judgement”) ... only in al-Barzakh (interspace to hereafter) (open in a new window)
"...That is why they're in such a rush to build nuclear arms, to wipe out non-Muslims en masse"

Omar Ahmad, the founder of the Council of American-Islamic Relations (CAIR), said in a controversial interview:

"Islam isn't in America to be equal to any other religions, but to become dominant. The Koran, the Muslim book of scripture, should be the highest authority in America, and Islam the only accepted religion on Earth."

WorldNetDaily, p. 129 "ISLAM is of THE DEVIL" by Dr Terry Jones

"Eliminating and destroying Western civilization form within and 'sabotaging' its miserable house so that it is eliminated and God's religion is made victorious over all other religions."